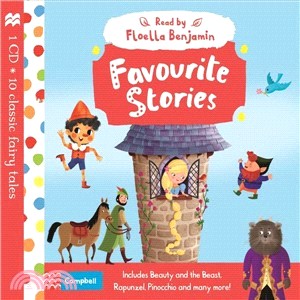 From Beauty and the Beast and Cinderella to Rapunzel and Pinocchio, this collection of ten popular fairy tales is one which children will want to hear again and again. Read by well-known children's TV presenter Floella Benjamin, with added sound effects and music and an approximate running time of 70 minutes, Favourite Stories is fun to listen to at home or in the car.

Stories:
Beauty and the Beast
The Princess and the Pea
The Three Billy Goats Gruff
Rapunzel
Hansel and Gretel
Cinderella
Pinocchio
The Elves and the Shoemaker
Snow White
Dick Whittington

Floella Benjamin is a television presenter, actress, singer, author, producer, and politician. Her varied career has taken her from children’s television to the House of Lords, where she holds the title Baroness Benjamin. She is the author of the inspirational memoir Coming to England, and has won numerous accolades, including a Special Lifetime Achievement Award from BAFTA.
PrevNext