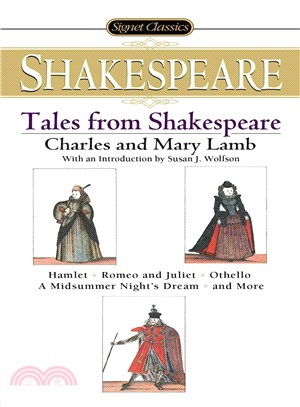 Includes: The Tempest - A Midsummer Night's Dream - The Winter's Tale - Much Ado About Nothing - As You Like It - Cymbeline - The Two Gentlemen of Verona - The Merchant of Venice - King Lear - Macbeth - All's Well that Ends Well - The Taming of the Shrew - The Comedy of Errors - Measure for Measure - Twelfth Night - Timon of Athens - Romeo and Juliet - Hamlet - Othello - Pericles

Charles and Mary Lamb were brother and sister, both gifted writers plagued with madness at certain times in their lives. Charles Lamb is best known for the brilliant personal essays he wrote under the name Elia, first published in London magazine from 1820 to 1823. He was highly acclaimed as a critic and was a close friend to some of the greatest authors of his time, particularly Samuel Taylor Coleridge, William Wordsworth, and Leigh Hunt. For a time in 1795?96, he suffered a nervous breakdown. Then, in 1796, Mary, in a fit of derangement, fatally stabbed their mother. Charles undertook the charge of his sister, who suffered periodic breakdowns, and she gratefully repaid him with deep affection and caring. Together they produced Tales from Shakespeare (1807) and Mrs. Leicester’s School (1809), a largely autobiographical collection of stories mostly written by Mary. In The Adventures of Ulysses (1808), Charles also adapted The Odyssey into a form more accessible to the layman. Charles died in 1834 and Mary in 1847.

Susan J. Wolfson, Professor of English at Princeton University, is a widely recognized authority on British Romanticism, the era in which the Lambs’ Tales from Shakespeare was first published. She is the author of several books, including Formal Charges: The Shaping of Poetry in British Romanticism and Borderlines: The Shiftings of Gender in British Romanticism, as well as many articles on the writers, texts, and issues of literary study, particularly in the Romantic era. She is also on the board of the editors of the Longman Anthology of British Literature and General Editor of the Longman Cultural Editions.

Sylvan Barnet received a BA from New York University and an MA and a PhD from Harvard University. At Tufts University, where he served as chair of the Department of English, he taught courses ranging from Chaucer to twentieth-century literature, though he specialized in courses on Renaissance drama. He is the general editor of the Signet Classics Shakespeare series, the author of numerous essays on Shakespeare as well as of A Short Guide to Shakespeare, and the author and coauthor of several dramatic texts, including editions of selected plays by Oscar Wilde and George Bernard Shaw.
PrevNext