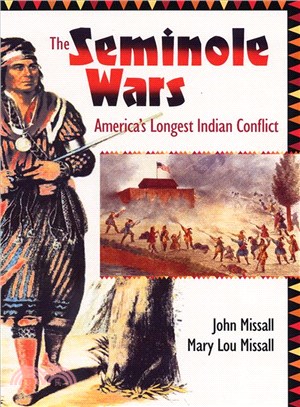 "In this insightful book the conflicts known as the Seminole Wars are placed in the larger context of American history. Twenty-first-century Seminole Indians and all other Floridians have been shaped in part by those nineteenth-century events."--Jerald T. Milanich, Florida Museum of Natural History

The Seminole Wars were the longest, bloodiest, and most costly of all the Indian wars fought by this nation. Written for a popular audience, this illustrated history is the first book to provide a comprehensive overview of all three wars. John and Mary Lou Missall examine not only the wars that were fought between 1817 and 1858 but also the events leading up to them and their place in American history. In particular it sheds new light on the relationship between the wars, the issue of slavery, and the prevailing attitudes toward Native Americans.

While fought in Florida, the Seminole Wars were a major concern to the nation as a whole. In addition to the issue of slavery, a culture of national arrogance and religious fervor fostered an attitude that allowed the conflicts to happen.

The first war, led by General Andrew Jackson, was part of an attempt to wrest Florida from Spain and had international repercussions that led to a lengthy congressional investigation. The second, which lasted seven years, took the lives of more than 1,500 soldiers and resulted in the forced removal of more than 3,000 Seminole Indians from Florida and the deaths of countless others. During 1836 and 1837 it was the predominant story in national newspapers, and public support for the war was fueled in part by fear among slaveholders that black Seminoles might inspire a general slave uprising. The third war, fought on the eve of the Civil War, was an attempt to remove the final remnants of the Seminole Nation from their homes in the Everglades.

The authors describe the wars as both a military and a moral embarrassment--a sad chapter in American history that has been overshadowed by the Civil War and by Indian wars fought west of the Mississippi. The conflicts were the nation's first guerrilla wars. They offered the country its first opportunity for aggressive territorial expansion and highlighted the dangers of an inflexible government policy. Analyzing events of the wars against larger issues, the authors observe: "It often seems as if the Seminole Nation was the nail being pounded by the hammer of American policy. What interested us most was why the hammer was swung in the first place."

Based on original research that makes use of diaries, military reports, and archival newspapers, this work will be of interest to general readers as well as historians of Florida and Native American life and to those who study the antebellum South and the early American Republic.?

John and Mary Lou Missall serve on the board of directors of the Seminole Wars Historic Foundation, Inc.

John and Mary Lou Missall serve on the board of directors of the Seminole Wars Historic Foundation, Inc.
PrevNext