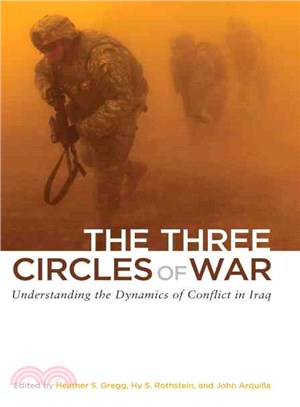 "This eclectic and holistic volume collects the wisdom of a remarkable set of writers in many disciplines, providing readers with a deeper understanding of how each of these wars unfolded."---Maj. Gen. Robert H. Scales, Jr., USA (Ret.), former commandant of the Army War College and coauthor of The Iraq War: A Military History

"Throughout history, withdrawals from the battlefied have proved complex and fraught with danger. Time and again, nations have ensured future warfare by misunderstanding conflicts just ended. As the American drawdown in Iraq proceeds, Gregg, Rothstein, and Arquilla put us on the path toward wisdom---and what may pass for peace---by properly defining the dynamics of the Iraq War."---Robert Andrews, former special assistant to the secretary of the Army, former assistant secretary of defense for special operations and Iow-intensity conflict, and former Special Forces officer in Vietnam

"The Three Circles of War is a much-needed assessment of the evolving character of the Iraq War. The editors have assembled a first-rate team of contributors who illuminate the complex nature of the war. In so doing, they highlight the challenges inherent in understanding contemporary conflicts."---Thomas Mahnken, professor of strategy, U.S. Naval War College, former deputy assistant secretary of defense for policy planning, and author of Uncovering Ways of War: U.S. Intelligence and Foreign Military Innovation, 1918-1941

"The Three Circles of War offers not only a thoughtful analysis on a wide range of critical issues that affected the war in Iraq, but issues that will continue to affect the wars we fight in Afghanistan and beyond. In short, this important volume should be read by anyone who wants to understand the complexities of modern-day armed conflicts, and particularly by those in the U.S. national security system with responsibility for meeting these irregular warfare challenges."---Richard Shultz, professor of international politics, Fletcher School of Law and Diplomacy, and coauthor of Insurgents, Terrorists, and Militias: The Warriors of Contemporary Combat

The conflict in Iraq is characterized by three types of war: interstate conflict, insurgency, and civil war. The Coalition's invasion of Iraq in March 2003 began as an interstate war. No sooner had Saddam Hussein been successfully deposed, however, than U.S.-led forces faced a lethal insurgency. After al Qaeda in Iraq bombed the Shia al-Askari Shrine in 2006, the burgeoning conflict took on the additional element of civil war, with sectarian violence between the Sunni and the Shia.

The most effective strategies in a war as complicated as the three-level conflict in Iraq are intertwined and complementary, according to the editors of this volume. For example, the "surge" in U.S. troops in 2007 went beyond an increase in manpower; the mission had changed, giving priority to public security. This new direction also simultaneously addressed the insurgency as well as the civil war by forging new, trusting relationships between Americans and Iraqis and between Sunni and Shia. This book has broad implications for future decisions about war and peace in the twenty-first century
Heather S. Gregg is an assistant professor at the U.S. Naval Postgraduate School's department of defense analysis. Gregg is a contributing author of the RAND reports Beyond Al Qaeda (2006) and After Saddam: Prewar Planning and the Occupation of Iraq (2008)
Hy S. Rothstein is a senior lecturer of defense analysis at the Naval Postgraduate School. He served in the U.S. Army as a Special Forces officer for twenty-six years and is the author of Afghanistan and the Troubled Future of Unconventional Warfare (Naval Institute Press, 2006)
John Arquilla is a professor of defense analysis at the U.S. Naval Postgraduate School. He is the author of Networks and Netwars: The Future of Terror, Crime, and Militancy, with David Ronfeldt (Rand, 2002), and Worst Enemy: The Reluctant Transformation of the American Military (Ivan R. Dee, 2008)
PrevNext