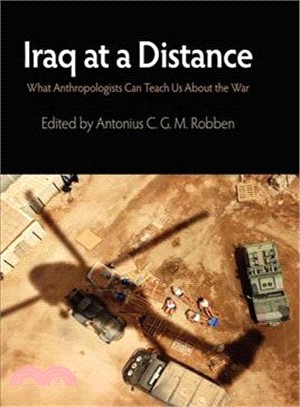 The Iraq War has cost innumerable lives, caused vast material destruction, and inflicted suffering on millions of people. Iraq at a Distance: What Anthropology Can Teach Us About the War focuses on the plight of the Iraqi people, caught since 2003 in the carnage between U.S. and British troops on one side and, on the other, Iraqi insurgents, militias, and foreign al Qaeda operatives.

The volume is a bold attempt by six distinguished anthropologists to study a war zone too dangerous for fieldwork. They break new ground by using their ethnographic imagination as a research tool to analyze the Iraq War through insightful comparisons with previous and current armed conflicts in Cambodia, Israel, Palestine, Northern Ireland, Afghanistan, and Argentina. This innovative approach extends the book's relevance beyond a critical understanding of the devastating war in Iraq. More and more parts of the world of long-standing ethnographic interest are becoming off-limits to researchers because of the war on terror. This book serves as a model for the study of other inaccessible regions, and it shows that the impossibility of conducting ethnographic fieldwork does not condemn anthropologists to silence.

Essays analyze the good-versus-evil framework of the war on terror, the deterioration of women's rights in Iraq under fundamentalist coercion, the ethnic-religious partitioning of Baghdad through the building of security walls, the excessive use of force against Iraqi civilians by U.S. counterinsurgency units, and the loss of popular support for U.S. and British forces in Iraq and Afghanistan after the brutal regimes of the Taliban and Saddam Hussein had been toppled.

Antonius C. G. M. Robben is Professor of Anthropology at Utrecht University. His books include Political Violence and Trauma in Argentina, also available from the University of Pennsylvania Press, as well as the edited volumes Fieldwork Under Fire: Contemporary Studies of Violence and Survival (with Carolyn Nordstrom) and Cultures Under Siege: Collective Violence and Trauma (with Marcelo Suarez-Orozco).
PrevNext