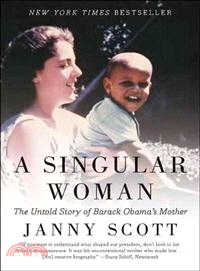 The New York Times bestseller-an unprecedented look into the life and character of the woman who raised a president.

Barack Obama has written extensively about his father but credited his mother for "what is best in me." Still, little is known about this fiercely independent, spirited woman who raised the man who became the first biracial president of the United States. This book is that story.

In A Singular Woman, award-winning New York Times reporter Janny Scott tells the story of this unique woman, Stanley Ann Dunham, who broke many of the rules of her time, and shows how her fierce example helped influence the future president-and can serve as an inspiration to us all.

Janny Scott was a reporter for The New York Times from 1994 to 2009, when she left to write this book. She was a member of the Times reporting team that won the 2000 Pulitzer Prize for national reporting.
PrevNext