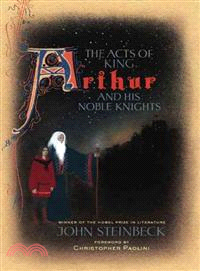 A modern retelling of the legendary Arthurian tales from one of the twentieth century?s greatest writers

Morte d?Arthur was one of the first books that John Steinbeck enjoyed reading as a child, and it became a favorite story to read to his own children. Here now is Steinbeck?s only work of fantasy literature?his modernization of Malory?s adventures of King Arthur and the Knights of the Round Table, who together took the oath of knightship, swearing never to use violence without good purpose, to be merciful, to protect women, and never to fight for an unjust cause or personal gain. Here are the iconic and legendary tales of King Arthur, Guinevere, Sir Lancelot, Merlin, and Morgan le Fay. Christopher Paolini, author of the #1 New York Times bestselling novels Eragon and Eldest, has written a new foreword offering a fresh and young perspective on this classic.

This is a book sure to capture the attention and imagination of a wide audience, including the legions of Steinbeck fans, those who love the legendary adventures of King Arthur and his Knights, as well as the countless fans of science fiction and fantasy literature, and everyone who loves Paolini?s bestselling novels.

John Steinbeck (1902A–1968) is the author of The Grapes of Wrath, East of Eden, Of Mice and Men, and many other American classics. He was one of the most prolific and influential authors of his generation and received a Nobel Prize in Literature in 1962.
Christopher Paolini is the author of the #1 New York Times bestsellers Eragon and Eldest.
PrevNext