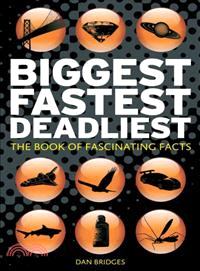 The perfect trivia resource to make sure you win your next game of Trivial Pursuit
?
For anyone who has ever wished?they could remember?everything they?learned at school, or who ever?felt the answer to a tie-breaker was on the tip of your tongue,?this treasure trove of lists will liven up any lunch break, letting them impress their friends?with facts on astronomy, history, invention, the natural world, and a wealth of other subjects. The world's biggest island? Greenland, Arctic, 2,175,000 km2 (840,000 m2). The world's fastest bird? The peregrine falcon, which dives after prey at 124 mph.?The world's deadliest land animal? The Golden Poison Frog of Central and South America.
Dan Bridges has been an obsessive fact-collector since childhood.
PrevNext