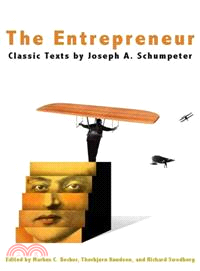 Joseph Schumpeter is seen as the foremost theoretician of entrepreneurship. In addition, Schumpeter, whose "creative destruction" is as famous as Milton Friedman's "there is no free lunch," is increasingly recognized as a major economist, often given the same stature as John Maynard Keynes.

Schumpeter spent the last twenty years of his life as a Professor of Economics at Harvard University. English-speaking readers may be familiar with some of his works, especially The Theory of Economic Development and the classic Capitalism, Socialism, and Democracy. However, very few of Schumpeter's key texts on the entrepreneur and entrepreneurship have been available in English.

This anthology contains several newly translated texts and puts together, for the very first time, all of Schumpeter's writings on the entrepreneur and entrepreneurship. English-speaking readers will now be able to access the entire palette of Schumpeter's work and to follow the evolution of his ideas over time.

The volume begins with an introduction that points readers to the most important aspects of the works presented. The introduction also attempts to go beyond Schumpeter's ideas, drawing on his basic intuitions of entrepreneurship to share a couple of key notions: that entrepreneurship consists of a new combination of already existing elements in the economy and that the entrepreneur has to break through resistance to the new idea, in him or herself as well as in others.