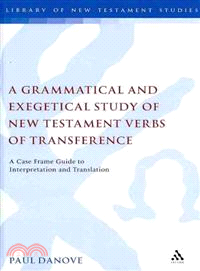 <div>This study continues the adaptation of the method of Case Frame analysis for the investigation of the Greek text of the New Testament. Case Frame analysis distinguishes the words of a language into two categories, predicators [words that require completion by other words for their correct grammatical use] and non-predicators [words that do not require such completion], and provides rigorous procedures for describing the syntactic, semantic, and lexical requirements that predicators impose on the words that complete their meaning. The inclusion of semantic function and feature descriptions in Case Frame analysis permits the development of a new genre of lexicon that specifies not only syntactic and lexical information (as do traditional dictionaries) but detailed semantic information. The resulting Case Frame lexicon entries are both more compact and more nuanced than traditional lexicon entries. <br/><br/>Danove conducts an exhaustive Case Frame analysis of the ditransitive verbs of transference in the New Testament. He uses this analysis to develop a set of descriptive guidelines for interpreting and translating the various usages of ditransitive verbs of transference and applies these rules in exegetical studies of the text of the New Testament to generate a Case Frame lexicon of the verbs of transference in the New Testament. This study will distinguish the requirements of the 127 New Testament verbs of transference according to four syntactic functions, twelve semantic functions, and 22 lexical realizations. This will permit a rigorous investigation of all occurrences of verbal complements with the same syntactic, semantic, and lexical attributes. <br/><br/>The study also will consider the influence of one semantic feature [an inherent quality of words that has implications for their lexical realization] and of the ‘intrusion' of four grammatical constructions [inherent structuring templates of grammar that govern syntactic, semantic, and lexical attributes and modify meaning] on each category of complements with the same syntactic, semantic and lexical description. This will produce a rigorous description of meaning that becomes the basis for Danove's contributions to the linguistic study of biblical Greek and to the exegesis of biblical texts. </div>>
Paul Danove is Associate professor of New Testament Studies at Villanova University, USA.
PrevNext