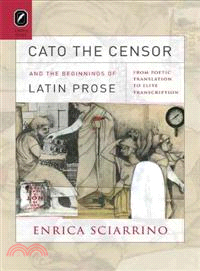 In the past decade, classical scholarship has been polarized by questions concerning the establishment of a literary tradition in Latin in the late third century BCE. On one side of the divide, there are those scholars who insist on the primacy of literature as a hermeneutical category and who, consequently, maintain a focus on poetic texts and their relationship with Hellenistic precedents. On the other side are those who prefer to rely on a pool of Latin terms as pointers to larger sociohistorical dynamics, and who see the emergence of Latin literature as one expression of these dynamics. Through a methodologically innovative exploration of the interlacing of genre and form with practice, Enrica Sciarrinobridges the gap between these two scholarly camps and develops new areas of inquiry by rescuing from the margins of scholarship the earliest remnants of Latin prose associated with Cato the Censor—a “new man” and one of the most influential politicians of his day. By systematically analyzing poetic and prose texts in relation to one another and to diverse authorial subjectivities, Cato the Censor and the Beginnings of Latin Prose: From Poetic Translation to Elite Transcription offers an entirely new perspective on the formation of Latin literature, challenges current assumptions about Roman cultural hierarchies, and sheds light on the social value attributed to different types of writing practices in mid-Republican Rome.
PrevNext