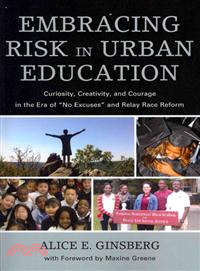 At a time when American urban public education is under broad attack, and in which America is perceived as a nation at risk that is losing the race to the Top, educators and politicians from across the spectrum are promoting increased emphasis on standardized testing, business models of school reform, zero tolerance, no excuses, promoting cultural assimilation, and building a standardized curriculum. Ginsberg argues that in the effort to reduce the achievement gap and mitigate the pejorative label of ‘at-risk,’ we are in danger of eliminating risk from education entirely. This is especially the case in urban schools with large numbers of poor and minority students. Ginsberg explores alternative approaches to student achievement at four dynamic Philadelphia public schools. This book provides a grounded, close look at alternative and innovative pedagogies which embrace risk through an emphasis on critical inquiry, cultural diversity, global awareness, project-based learning, collaboration, community partnerships, and student activism. The result? Schools which can nurture a new generation of students who are not only smart and literate but can think help preserve American Democracy while furthering the quest for peace, unity, equity, and social justice.