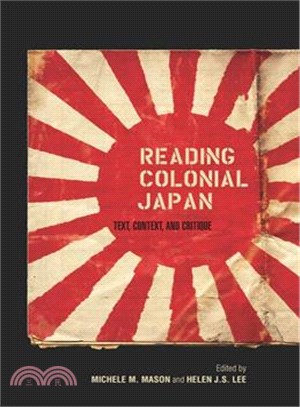 By any measure, Japan's modern empire was formidable. The only major non-western colonial power in the 20th century, Japan controlled a vast area of Asia and numerous archipelagos in the Pacific Ocean. The massive extraction of resources and extensive cultural assimilation policies radically impacted the lives of millions of Asians and Micronesians, and the political, economic, and cultural ramifications of this era are still felt today.

The Japanese empire lasted from 1869-1945. During this time, how was the Japanese imperial project understood, imagined, and lived? Reading Colonial Japan is a unique anthology that aims to deepen knowledge of Japanese colonialism(s) by providing an eclectic selection of translated Japanese primary sources and analytical essays that illuminate Japan's many and varied colonial projects. The primary documents highlight how central cultural production and dissemination were to the colonial effort, while accentuating the myriad ways colonialism permeated every facet of life. The variety of genres the explored includes legal documents, children's literature, cookbooks, serialized comics, and literary texts by well-known authors of the time. These cultural works, produced by a broad spectrum of "ordinary" Japanese citizens (a housewife in Manchuria, settlers in Korea, manga artists and fiction writers in mainland Japan, and so on), functioned effectively to reinforce the official policies that controlled and violated the lives of the colonized throughout Japan's empire.

By making available and analyzing a wide-range of sources that represent "media" during the Japanese colonial period, Reading Colonial Japan draws attention to the powerful role that language and imagination played in producing the material realities of Japanese colonialism.

Michele M. Mason is assistant professor of Japanese literature at the University of Maryland, College Park. She is also the co-producer and interpreter for the short documentary film Witness to Hiroshima (2010). Helen J.S. Lee is an assistant professor of Japanese studies at the Underwood International College, Yonsei University, Seoul, Korea.
PrevNext