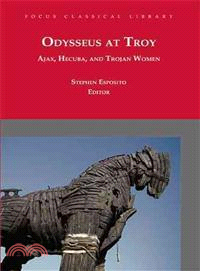 This book contains translations of three plays:Ajax, Hecuba, and Trojan Women. They are all centered around the mythological theme of the Greek warrior, Odysseus, hero of the Trojan War. All three plays are complete, with notes and introductions, plus an introduction to the volume with background to the story which was one of the most popular themes and one of the most written about Greek hero in Greek literature.

Written during a tumultuous age of sophists and demagogues, these three plays (c. 450-425 BCE) bear witness to the gradual degradation of Odysseus’ character. In presenting the unexpected devolution of a renowned mythic figure, the plays examine numerous themes relevant to contemporary American political life: the profound psychological consequences of brought on by the stress of war and why a once proud and noble warrior might commit suicide; and the dehumanizing darkness that descends upon innocent female war-victims when victors use act on false political necessity.

Stephen Esposito is Associate Professor of Classics at Boston University where, in 2009/10, he won Frank and Lynne Wisneski Award for Teaching Excellence. He has previously translated Euripides’ "Bacchae" and edited "Euripides: Medea, Hippolytus, Heracles, Bacchae", both for Focus Publishing. He is also the founding editor of the new Oxford Greek and Latin College Commentaries, the first volume of which will be his grammatical commentary (with running vocabulary) on Sophocles’ "Oedipus Tyrannos".
PrevNext