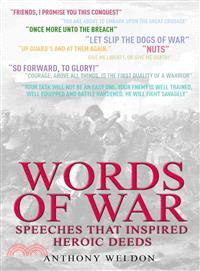 A collection of the world's greatest, most inspiring military speeches, each set in its historical context

Many of the most famous military speeches can be found in this collection, for example, General Dwight Eisenhower to Allied troops before the invasion of Europe in 1944, Napoleon in his heyday inspiring the French Guard to greater glories, and Elizabeth I of England's stirring speech in which she declared, "I have the body of weak and feeble woman, but I have the heart and stomach of a king." Other famous entries include the Duke of Wellington's casual observations at the Battle of Waterloo: "I don't know what effect my men will have on the enemy, but by god they frighten me;" President Abraham Lincoln's brief but inspiring Gettysburg Address; the sometimes outrageous but often motivational General Patton "Better to fight for something than live for nothing;" and Winston Churchill's eloquent speeches of World War II. Also included are the literary orations, of which William Shakespeare was the master: "Then imitate the action of the tiger; stiffen the sinews, summon up the blood, and Let slip the dogs of war;" the supreme tacticians, such as Sun Tzu: "The supreme art of war is to subdue the enemy without fighting;" and Karl Von Clausewitz: "War is not an independent phenomenon, but the continuation of politics by different means." Occasionally readers will find the downright ridiculous—General McAuliffe's succinct but inspiringly defiant reply of "Nuts" to demands that he surrender when surrounded by Germans in the Belgium town of Bastogne in 1945, or Brigadier General the Earl of Longford's orders just before he died in battle at Gallipoli in 1915: "And don't bother ducking, the men don't like it and it doesn't do any good."

Anthony Weldon started Bene Factum Publishing 15 years ago. He is the coauthor of Numeroids.
PrevNext