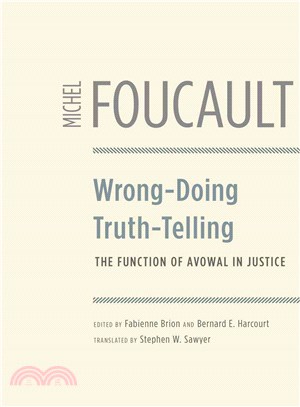 Three years before his death, Michel Foucault delivered a series of lectures at the Catholic University of Louvain that until recently remained almost unknown. These lectures—which focus on the role of avowal, or confession, in the determination of truth and justice—provide the missing link between Foucault’s early work on madness, delinquency, and sexuality and his later explorations of subjectivity in Greek and Roman antiquity.

Ranging broadly from Homer to the twentieth century, Foucault traces the early use of truth-telling in ancient Greece and follows it through to practices of self-examination in monastic times. By the nineteenth century, the avowal of wrongdoing was no longer sufficient to satisfy the call for justice; there remained the question of who the “criminal” was and what formative factors contributed to his wrong-doing. The call for psychiatric expertise marked the birth of the discipline of psychiatry in the nineteenth and twentieth centuries as well as its widespread recognition as the foundation of criminology and modern criminal justice.
Published here for the first time, the 1981 lectures have been superbly translated by Stephen W. Sawyer and expertly edited and extensively annotated by Fabienne Brion and Bernard E. Harcourt. They are accompanied by two contemporaneous interviews with Foucault in which he elaborates on a number of the key themes. An essential companion to Discipline and Punish, Wrong-Doing, Truth-Telling will take its place as one of the most significant works of Foucault to appear in decades, and will be necessary reading for all those interested in his thought.
Michael Foucault (1926–84) is one of the most significant social theorists of the twentieth century, his influence extending across many areas of the humanities and social sciences. Fabienne Brion is professor in the School of Law and Criminology at the Catholic University of Louvain. Bernard E. Harcourt is chair of the Political Science Department and the Julius Kreeger Professor of Law at the University of Chicago. He is the author of several books, including, most recently, The Illusion of Free Markets. Stephen W. Sawyer is chair and assistant professor of history at the American University of Paris.
PrevNext