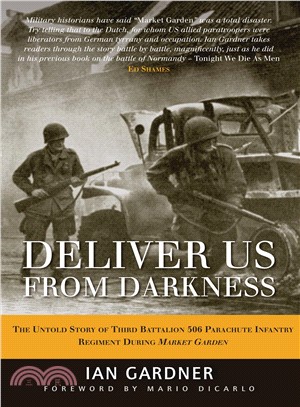 Ian Gardner, co-author of Tonight We Die as Men, is back with the second installment of the exploits of the 3/506 in WWII. Drawing on years of research and more than seventy extended interviews with veterans and civilians caught up in the fighting, Deliver Us from Darkness begins where the earlier book ended, with the troops taking R&R back in England after weeks of grueling fighting in Normandy.

Deliver Us from Darkness explains how, with little notice on Sept 17, 1944, the 101st Airborne Division parachuted into Holland as part of Operation Market Garden. Their mission was to secure the main highway that passed through the city of Eindhoven and facilitate the advance of Gen. Sir Miles Dempsey's Second British Army towards Arnhem. The soldiers had been lead to believe that after the capture of Eindhoven their mission would be over. In the end, however, it was only the beginning of a bloody 72-day campaign that would see no quarter given by either side.

Thousands of heavily armed enemy troops trapped behind Allied lines were reorganized into temporary fighting groups and sent on the offensive. Supported by Tiger tanks and self propelled artillery, the German army began an audacious series of counter attacks along the road to Nijmegen that became known as ‘Hell’s Highway.’ Over the next two weeks the 506th was constantly called upon to defend the transport hubs north of Eindhoven at Sint Oedenrode, Veghel and Uden suffering horrendous casualties. The mission in Holland would be one that the men would never forget. Many felt that their lives had been misused and wasted—Normandy had been bad enough, but this time the members of 3/506 had been through hell.

Ian Gardner served for five years in Support Company,10th Battalion the Parachute Regiment as a medic, before leaving the Territorial Army in 1993 due to a parachuting injury. Ian has always loved military history but it was several years after leaving 10 Para that his interest in World War II US Paratroopers really began. Inspired after a visit to Normandy in 2000 he decided to focus on the 101st Airborne Division and in particular the 3rd Battalion of the 506th Parachute Infantry Regiment. His previous publication told the story of the 3rd Battalion in France in 1944.
PrevNext