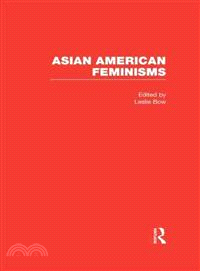 Co-published by Routledge and Edition Synapse

Especially since the postwar women’s and civil rights movements, there has been an explosion of interest in race and gender in the United States. Writing by and about Asian American women has kept pace with the emergence of serious scholarship concerned with the nuances of gender and culture, and as research in and around the area flourishes as never before, this new four-volume collection from Routledge and Edition Synapse meets the need for an authoritative reference work to make sense of a rapidly growing and ever more complex corpus of literature.

Asian American Feminisms counters the popular misconstruction of Asian women as pre-feminist subjects who lack critical gender and race consciousness. At the same time, understanding the ways in which women remain vulnerable to state institutions and to cultural representations becomes increasingly urgent in a globalized world; and this collection bridges the divide between women-of-colour feminism in the United States and the transnational analysis of women in Asia and the Asian diaspora.

Edited by Leslie Bow, a leading scholar in the field, Asian American Feminisms is a vital resource for researchers and students seeking an introduction to Asian American feminist thought. It will also be welcomed by established scholars and activists invested in women’s issues and gender analysis in the United States, the Pacific Rim, and beyond.