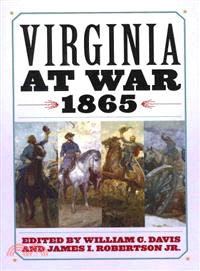 By January 1865, most of Virginia's schools were closed, many newspapers had ceased publication, businesses suffered, and food was scarce. Having endured major defeats on their home soil and the loss of much of the state's territory to the Union army, Virginia's Confederate soldiers began to desert at higher rates than at any other time in the war, returning home to provide their families with whatever assistance they could muster. It was a dark year for Virginia.

Virginia at War, 1865 closely examines the end of the Civil War in the Old Dominion, delivering a striking depiction of a state ravaged by violence and destruction. In the final volume of the Virginia at War series, editors William C. Davis and James I. Robertson Jr. have once again assembled an impressive collection of essays covering topics that include land operations, women and families, wartime economy, music and entertainment, the demobilization of Lee's army, and the war's aftermath. The volume ends with the final installment of Judith Brockenbrough McGuire's popular and important Diary of a Southern Refugee during the War. Like the previous four volumes in the series, Virginia at War, 1865 provides valuable insights into the devastating effects of the war on citizens across the state.

William C. Davis, professor of history and director of programs at Virginia Tech's Virginia Center for Civil War Studies, is the author of Lincoln's Men: How President Lincoln Became Father to an Army and a Nation. He lives in Blacksburg, Virginia.

James I. Robertson Jr., Alumni Distinguished Professor of History at Virginia Tech and director of the Virginia Center for Civil War Studies, is the author of Stonewall Jackson: The Man, the Soldier, the Legend. He lives in Blacksburg, Virginia.