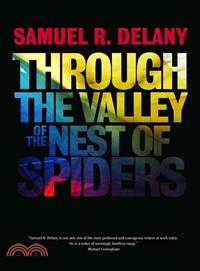 Like his legendary Hogg, The Mad Man, and the million-seller Dhalgren, Samuel R. Delany’s major new novel Through the Valley of the Nest of Spiders?explicit, poetic, philosophical, and, yes, shocking?propels readers into a gay sexual culture unknown to most urban gay men and women, a network of rural gay relations?with the twist that this one is supported by the homophile Kyle Foundation, started in the early 1980s by a black multi-millionaire, Robert Kyle III, to improve the lives of black gay men.

In 2007, days before his seventeenth birthday, Eric Jeffers’ stepfather brings him to live with his mother, who works as a waitress in the foundering tourist town of Diamond Harbor on the Georgia coast. In the local truck stop restroom, on his first day, Eric meets nineteen-year-old Morgan Haskell, as well as half a dozen other gay men who live and work in the area. The boys become a couple, and for the next twenty years labor as garbage men along the coast, sharing their lives and their lovers, learning to negotiate a committed open relationship. For a decade they manage a rural movie theater that shows pornographic films and encourages gay activity among the audience. Finally, they become handymen for a burgeoning lesbian art colony on nearby Gillead Island, as America moves twenty years, forty years, sixty years into a future fascinating, glorious, and?sometimes?terrifying.
Along with four Nebula Awards, two Hugo Awards, and the William Whitehead Memorial Award for his lifetime contribution to lesbian and gay writing, Samuel R. Delany is a winner of the Kessler Award from CLAGS at SUNY Graduate Center.

Born and raised in New York City’s Harlem in 1942, from 1988 to 1999 he was a professor of comparative literature at the University of Massachusetts at Amherst. After two years’ teaching in the SUNY Buffalo Poetics Program, since January 2000 he has been a professor of English and creative writing at Temple University, where he is Director of the Graduate Creative Writing Program.

He was a judge on the fiction panel for the 2010 National Book Award. A collection of his interviews has appeared in the University of Mississippi Press’s prestigious Conversations with Writers Series, Conversations with Samuel R. Delany (2009), edited by Carl Freedman.

He lives in New York City.