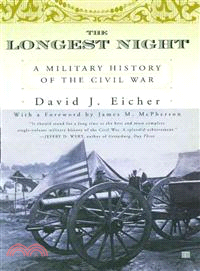 In this compelling new account of the American Civil War, noted historian David Eicher gives us an authoritative history of battle from the first shots at Fort Sumter to Lee's surrender at Appomattox. As a strictly military history, The Longest Night covers hundreds of engagements, both well known and obscure, including the oft-neglected Western theater and naval actions along the coasts and rivers. The result is a gripping popular history that will fascinate anyone just learning about the Civil War while offering more than a few surprises for longtime students.

Drawing on hundreds of sources and excerpts from correspondence by those who fought the war, The Longest Night conveys a real sense of life -- and death -- on the battlefield. In addition, Eicher analyzes each side's evolving strategy; examines the tactics of Lee, Grant, Johnston, and Sherman; and discusses significant topics such as prisons, railroads, shipbuilding, clandestine operations, and the role of African-Americans in the war. This is an indispensable chronicle of the war that James M. McPherson, in the Foreword, calls "the most dramatic, violent, and fateful experience in American history."

David J. Eicher is an astronomer and Civil War historian. The managing editor of Astronomy magazine, he is the author of several books on the Civil War, among them Mystic Chords of Memory: Civil War Battlefields and Historic Sites Recaptured and The Civil War in Books: An Analytical Bibliography. He lives with his wife and son in the Milwaukee suburbs.
PrevNext