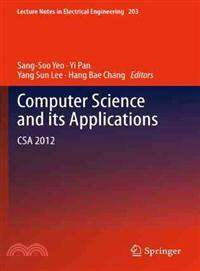 The 4th FTRA International Conference on Computer Science and its Applications (CSA-12) will be held in Jeju, Korea on November 22~25, 2012. CSA-12 will be the most comprehensive conference focused on the various aspects of advances in computer science and its applications. CSA-12 will provide an opportunity for academic and industry professionals to discuss the latest issues and progress in the area of CSA. In addition, the conference will publish high quality papers which are closely related to the various theories and practical applications in CSA. Furthermore, we expect that the conference and its publications will be a trigger for further related research and technology improvements in this important subject. CSA-12 is the next event in a series of highly successful International Conference on Computer Science and its Applications, previously held as CSA-11 (3rd Edition: Jeju, December, 2011), CSA-09 (2nd Edition: Jeju, December, 2009), and CSA-08 (1st Edition: Australia, October, 2008).
Sang-Soo Yeo is currently a professor at the Division of Computer Engineering, Mokwon University, Korea. He is Vice President of Future Technology Research Association International (FTRA) and Vice President of Korea Information Technology Convergence Society. Dr. Yeo has been serving as various chair positions in a number of conferences and workshops; MUE 2007, IPC-07, FBIT 2007, FGCN 2007, WPS 2008, SH'07, MUE 2008, ISA 2008, CSA 2008, UMC 2008, BSBT 2008, FGCN 2008, ASEA 2008, SecTech 2008, CSA 2009, EM-Com 2009, ICUT 2009, FutureTech 2010, ICA3PP 2010, ITCS 2010, EMC 2010, MUE 2010, HumanCom 2010, ACSA 2010, ISPA 2011, ICASE 2011, MUE 2011, FutureTech 2011, GSDP 2011, ITCS 2011, STA 2011, and PDCAT 2011. Dr. Yeo's research interests include Security, Ubiquitous Computing, Multimedia Service, Ubiquitous Computing, Embedded System, and Bioinformatics. He is a member of the KIPS, KIISE, KICS, KIISC, KMS, KDAS, KONI, KIMICS, KIIT, IEEE, and IEEE CS.Yi Pan was born in Jiangsu, China. He entered Tsinghua University in March 1978 with the highest college entrance examination score among all 1977 high school graduates in Jiangsu Province. Currently, he is the chair and a professor in the Department of Computer Science and a professor in the Department of Computer Information Systems at Georgia State University. Dr. Pan received his B.Eng. and M.Eng. degrees in computer engineering from Tsinghua University, China, in 1982 and 1984, respectively, and his Ph.D. degree in computer science from the University of Pittsburgh, USA, in 1991. Dr. Pan's research interests include parallel and cloud computing, wireless networks, and bioinformatics. Dr. Pan has published more than 140 journal papers with about 50 papers published in various IEEE/ACM journals. In addition, he has published over 150 conference papers and edited/authored 37 books. He has received many awards from organizations such as IEEE, NSF, AFOSR, JSPS, IBM, ISIBM, IISF and Mellon Foundation. Dr. Pan has served as an editor-in-chief or editorial board member for 15 journals including 6 IEEE Transactions and a guest editor for 10 special issues for 9 journals including 2 IEEE Transactions. He has organized numerous international conferences and workshops and has delivered over 20 keynote speeches at international conferences. Dr. Pan is a "Great Master Face-to-Face" Series Speaker (2012), an IEEE Distinguished Speaker (2000-2002), a Yamacraw Distinguished Speaker (2002), a Shell Oil Colloquium Speaker (2002), and a senior member of IEEE. He is listed in Men of Achievement, Who's Who in Midwest, Who's Who in America, Who's Who in American Education, Who's Who in Computational Science and Engineering, and Who's Who of Asian Americans.Yang Sun Lee received the B.S. and M.S. degrees in Electrical & Electronic Engineering from Dongshin University and Ph.D. degrees in Dept. of IT Engineering from Mokwon University in 2001, 2003 and 2007, respectively. He was a Senior Engineer at R&D Center, Fumate Co., Ltd. from 2007 to 2009.He worked as a Research Professor in Dept. of Information Communication Engineering at Chosun University from 2009 to 2012. Since 2012, He is currently a professor at the Division of Computer Engineering at Mokwon University. He is also serving as a guest editor, and editorial staff and review committee of INFORMATION Journal, Security and Communication Networks - Wiley InterScience, Wireless Personal Communications – Springer, International Journal of Communication Systems – Wiley InterScience, IET Signal Processing – IET Journal, IET Communications – IET Journal and other journals. His current research interests include UWB, multimedia communication, Network Transmission Scheme and Ubiquitous Sensor Networks.Hang Bae Chang received his Ph.D. degree in Graduate School of Information from Yonsei University, Korea. From March, 2007 to February, 2012, He had been a professor at the Department of Business Administration, Daejin University, Korea. He is now a profe
PrevNext