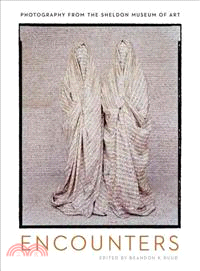 Encounters explores photography through the lens of transnationalism, highlighting the artistic, cultural, geographic, scientific, and technological conflicts and concurrences that have shaped the modern photographic image. Arranged thematically rather than chronologically, the catalog addresses issues such as tourism, souvenir production, and the search for authenticity in the face of increasing industrialization; the transmission of American, European, and Mexican forms of modernism; gender identity and sexuality; the real and perceived tensions between nature and the built environment; and the convergences of art and science, craft and technology. Images are set within their context by the catalog’s principal author, Brandon K. Ruud, and are accompanied by lively, thought-provoking essays by a team of scholars that includes Zeynep Celik, Keith F. Davis, Gregory Nosan, Robert G. O’Meally, Britt Salveson, and the museum’s director, Jorge Daniel Veneciano.

Brandon K. Ruud is the curator of transnational American art at the Sheldon Museum of Art. He is the editor of Karl Bodmer’s North American Prints (Nebraska, 2004), which was named a New York Times notable book. More recently, he contributed to the catalogs American Modernism at the Art Institute of Chicago and Apostles of Beauty: Arts and Crafts from Britain to Chicago.
PrevNext