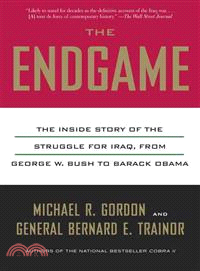 In this follow-up to their national bestseller Cobra II, Michael Gordon and General Bernard E. Trainor deftly piece together the story of the most widely reported but least understood war in American history. This stunning account of the political and military struggle between American, Iraqi, and Iranian forces brings together vivid reporting of diplomatic intrigue and gripping accounts of the blow-by-blow fighting that lasted nearly a decade. Informed by brilliant research, classified documents, and extensive interviews with key figures—including everyone from the intelligence community to Sunni and Shi’ite leaders and former insurgents to senior Iraqi military officers—The Endgame presents a riveting chronicle of the occupation of Iraq to the withdrawal of American troops that is sure to remain the essential account of the war for years to come.

Michael R. Gordon is the chief military correspondent for The New York Times, where he has worked since 1985. He is the coauthor, with Lieutenant General Bernard E. Trainor, of The Generals' War and Cobra II. He has covered the Iraq and Afghan wars, the Kosovo conflict, the Russian war in Chechnya, the 1991 Persian Gulf War, and the American invasion of Panama.

Bernard E. Trainor, a retired Marine Corps lieutenant general, was a military correspondent for The New York Times from 1986 to 1990. He was director of the National Security Program at Harvard University's John F. Kennedy School of Government from 1990 to 1996 and was a military analyst for NBC during the Iraq War.