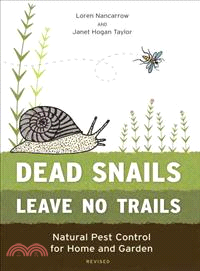 A practical guide to repelling indoor and outdoor pests using organic methods, updated with new information on getting rid of bedbugs and dust mites, plus includes updated online resources.

If you’ve ever had a swarm of fruit flies in your kitchen or a gopher wreaking havoc in your yard, you may have wondered what a conscientious gardener or homeowner can do short of heavy-duty chemical warfare. Dead Snails Leave No Trails is a comprehensive guide to repelling both indoor and outdoor pests using organic methods—it’s the perfect DIY solution to eliminate unwelcome visitors in your home and garden while keeping yourself,your family, and the environment safe from harmful chemicals.With a few easy-to-find items, you’ll learn how to:

‧ Make your own all-purpose pest repellents with simple ingredients like chile peppers and vinegar
‧ Use companion planting to attract beneficial insects and animals or repel harmful ones
‧ Keep four-legged intruders—including squirrels, deer, rabbits, and skunks—away from your prized vegetables and flowers
‧ Safely eliminate ants, roaches, and rodents from your house or apartment
‧ Protect your pets from critters like ticks and fleas

This revised edition contains newly updated information on today’s pest epidemics, like bedbugs, as well as new online resources for finding beneficial organisms that act as predators for specific pests. Full of tips, tricks, and straightforward instructions, Dead Snails Leave No Trails is the most user-friendly guide to indoor and outdoor natural pest solutions.

As one of the country’s first environmental TV reporters, LOREN NANCARROW has seen interest and knowledge in humans’ role in the natural environment grow significantly in the past three decades, and he’s been awarded some of broadcast journalism’s highest honors for reporting on environmental science and nature around the planet. When not covering the news, Loren has worked at improving the environment as a founding trustee of the EcoLife Foundation. The EcoLife Foundation has projects in the United States, Mexico, and Africa aimed at reducing carbon output, reforesting important habitat, and saving vulnerable species, like monarch butterflies in Mexico and mountain gorillas in Uganda. Loren makes his home in coastal Southern California. He and his wife, Susie, have three grown children. He is a passionate organic vegetable gardener.

A native Californian, JANET HOGAN TAYLOR graduated from San Jose State University with a bachelor’s degree in biology with emphasis in entomology. Janet took a job with the San Diego Zoo, where she became a senior keeper in the bird department. Never forgetting her roots in entomology, Janet helped develop several natural pest control techniques at the zoo to keep the birds and animals pest free. Currently, Janet works as an environmental scientist and resides in Southern California with her husband, a black lab named Drake, and hundreds of backyard birds, reptiles, and assorted varmints. She and her husband Brian, also an entomologist, have two grown children.

Loren and Janet have written three books together: Dead Snails Leave No Trails, Dead Daisies Make Me Crazy, and The Worm Book.