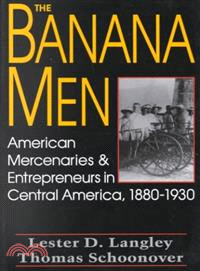 Ambitious entrepreneurs, isthmian politicians, and mercenaries who dramatically altered Central America's political culture, economies, and even its traditional social values populate this lively story of a generation of North and Central Americans and their roles in the transformation of Central America from the late nineteenth century until the onset of the Depression. The Banana Men is a study of modernization, its benefits, and its often frightful costs.The colorful characters in this study are fascinating, if not always admirable. Sam "the Banana Man" Zemurray, a Bessarabian Jewish immigrant, made a fortune in Honduran bananas after he got into the business of "revolutin," and his exploits are now legendary. His hired mercenary Lee Christmas, a bellicose Mississippian, made a reputation in Honduras as a man who could use a weapon. The supporting cast includes Minor Keith, a railroad builder and banana baron; Manuel Bonilla, the Honduran mulatto whose cause Zemurray subsidized; and Jose Santos Zelaya, who ruled Nicaragua from 1893 to 1910.The political and social turmoil of the modern Central America cannot be understood without reference to the fifty-year epoch in which the United States imposed its political and economic influence on vulnerable Central American societies. The predicament of Central Americans today, as isthmian peoples know, is rooted in their past, and North Americans have had a great deal to do with the shaping of their history, for better or worse.