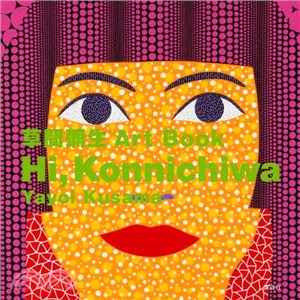 Japanese painter, sculptor, writer, installation and performance artist Yayoi Kusama has been in the vanguard of contemporary art for sixty years. Best known for her use of patterns of dots (which she claims evolved from the hallucinations she's had since childhood), Kusama, now 84 years old, is finally getting the international recognition she deserves.

Hi, Konnichiwa brings together Kusama's vivid imagery and haunting words with photos of the artist at work and at various stages in her life. The pieces are mostly from recent years (2000-2012), although there are some that go back as far as the 1950s. Here are Kusama's large-scale canvases, environmental sculptures, multi-media installations, and numerous self-portraits. Here, too, are photos of the artist at ten years old, and as a young woman in Tokyo and then New York, often wearing outrageous clothes of her own design. And we see Yayoi Kusama in recent years, working in her studio in Tokyo - minus the garish make-up and red wig. The book is a chronicle of her creative endeavors and of her life, offering a glimpse into the fevered imagination of this very complicated and fascinating woman.

Yayoi Kusama was born in 1929 in Japan, and from an early age, suffered from hallucinations, which she maintains inspired the visual language she continues to use today. At art school in Kyoto, she first began to experiment with the subversive themes that became her trademark. After leaving school, Kusama had a period of intense productivity, and by 1955, was gaining prominence as an artist in Japan.

In 1958, Yayoi Kusama moved to New York, where she was one of the pioneers of the Pop Art and performance art movements. She became a darling of the media, promoting free sex and anti-war activism. She started Kusama Fashion Company, which was quite successful -- her clothes sold in hundreds of stores including Bloomingdales

By the 1970s, the earlier energy and excitement of the New York art scene had subsided. In 1973, Kusama went back to Japan, and in 1977, took up residence in a psychiatric hospital, where she still lives. She built a large studio nearby and continues to work there.

While she certainly didn't fade into obscurity, Yayoi Kusama moved out of the spotlight. The last few years, however, have seen renewed interest in her work. In 2008, Christie's sold a painting for $5.1 million, then a record for a living female artist. A major retrospective opened at the Whitney Museum in New York in Summer 2013; and at the same she Kusama collaborated with Marc Jacobs for Louis Vuitton collection featuring her polka dots. Kusama recently signed with a new gallery in New York, and a solo show is planned for Fall 2013.

Yayoi Kusama was born in 1929 to an upper-middle-class merchant family living in Matsumoto, about 100 miles northwest of Tokyo. Her childhood was difficult: her parents' marriage was troubled , and Kusama began suffering from hallucinations and suicidal thoughts at an early age. She says that her art has been both a manifestation of her turbulent mental state, and a cathartic act. In the early 1950s, after briefly attending art school, Kusama moved to Tokyo, where she had several solo exhibitions of her paintings. In 1957, she moved to the U.S., settling in New York City. Here, she became actively involved in the New York avant-garde and Pop Art movements. In addition to her paintings and large soft sculptures, she organized "Happenings," often involving naked people painted with polka-dots and staged as anti-Vietnam War protests. She established the Kusama Fashion Company, which produced a line of outrageous clothing, which she often wore at events. Kusama moved back to Japan in 1973 and checked herself into a mental hospital, where she continues to live. She works from a nearby studio and produces paintings, sculptures, and installations -- still incorporating her polka-dot patterns into the pieces. She's also published a book of poems and a number of novels. In 1968, she produced and starred in the film Kusama's Self-Obliteration, which went on to win several interational awards. In 1991, Kusama had the featured role in the movie Tokyo Decadence, written and directed by Ryu Murakami; and in 1993, she collaborated with British musician Peter Gabriel on an installation in Yokohama. Another documentary entitled Kusama, Princess of Polka Dots is in progress.