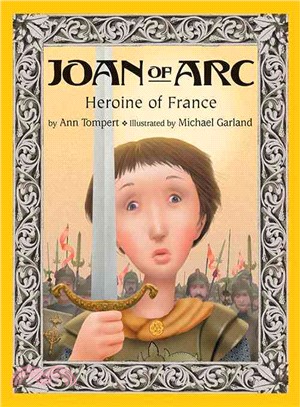 She was a peasant, who was born in a village in France. She was a soldier, who commanded an army. In time, she was pronounced a saint. Joan of Arc's life seems like a fable. Her death reads like tragedy. However, history records that she took command of French forces and drove the English from the city of Orleans. Drawing on the letters and testimony presented at Joan's trial, Ann Tompert presents a simply told narrative of a remarkable life. Joined with Michael Garland's dramatic illustrations that capture Joans' fifteenth-century world, here is the story of one of the most fascinating--and mysteriou--figures in history.
Ann Tompert is the author of many books for children, including Saint Patrick, a 1998 Booklist Top 10 Religious?Books for Youth. She lives in Port Huron, Michigan.

Michael Garland is the illustrator of the critically acclaimed Leah's Pony, by Elizabeth Friedrich. He lives in Patterson, New York.
PrevNext