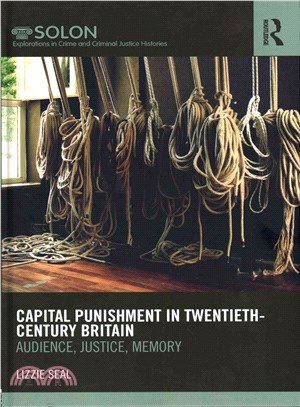 Capital punishment for murder was abolished in Britain in 1965. At this time, the way people in Britain perceived and understood the death penalty had changed – it was an issue that had become increasingly controversial, high-profile and fraught with emotion. In order to understand why this was, it is necessary to examine how ordinary people learned about and experienced capital punishment.

Drawing on primary research, this book explores the cultural life of the death penalty in Britain in the twentieth century, including an exploration of the role of the popular press and a discussion of portrayals of the death penalty in plays, novels and films. Popular protest against capital punishment and public responses to and understandings of capital cases are also discussed, particularly in relation to conceptualisations of justice. Miscarriages of justice were significant to capital punishment’s increasingly fraught nature in the mid twentieth-century and the book analyses the unsettling power of two such high profile miscarriages of justice. The final chapters consider the continuing relevance of capital punishment in Britain after abolition, including its symbolism and how people negotiate memories of the death penalty.

is groundbreaking in its attention to the death penalty and the effect it had on everyday life and it is the only text on this era to place public and popular discourses about, and reactions to, capital punishment at the centre of the analysis. Interdisciplinary in focus and methodology, it will appeal to historians, criminologists, sociologists and socio-legal scholars.

Lizzie Seal is Senior Lecturer in Criminology at the University of Sussex. Her research interests include gender representations of women who kill, cultural criminology, historical criminology and capital punishment. Her previous publications include Women, Murder and Femininity: Gender Representations of Women Who Kill (Palgrave, 2010) and, with Maggie O’Neill, Transgressive Imaginations: Crime, Deviance and Culture (Palgrave, 2012).