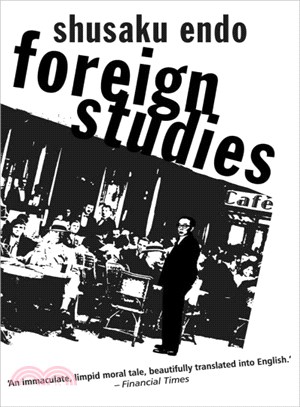 In the early 1950s, Shusaku Endo spent several years as an exchange student studying in Paris. Around him existentialism, Sartre, and Beckett were making the city the literary and philosophical capital of the world. But for Endo, the experience was deeply alienating, and he came away infected with tuberculosis, his studies incomplete, and having convinced himself that there could be no cultural commerce between East and West. Foreign Studies consists of three linked narratives exploring this theme. The first part, ?A Summer in Rouen,” concerns Kudo, a Japanese student invited to France in the 1950s. It is a lucent snapshot of a young man who feels adrift in a Western country. The second part, ?Araki Thomas,” sees Endo on familiar territory as he tells of an apostate Japanese Catholic who has visited 17th-century Rome. ?And You, Too,” the third part, is the story of Tanaka, a Japanese scholar of French literature who visits France in the 1960s to research the life and work of the Marquis de Sade.
Shusaku Endo is widely regarded as one of the greatest Japanese authors of the late?20th century. He has won many major literary awards and was nominated for the Nobel Prize several times. His novels, which have been translated into?28 languages, include Deep River, The Samurai, Scandal, The Sea and Poison, and Silence.
PrevNext