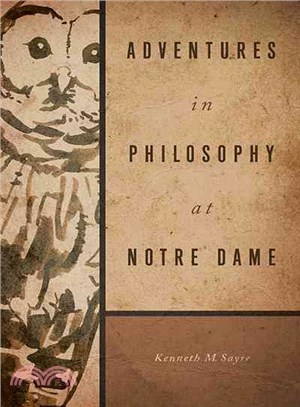 Adventures in Philosophy at Notre Dame recounts the fascinating history of the University of Notre Dame's Department of Philosophy, chronicling the challenges, difficulties, and tensions that accompanied its transition from an obscure outpost of scholasticism in the 1940s into one of the more distinguished philosophy departments in the world today. Its author, Kenneth Sayre, who has been a faculty member for over five decades, focuses on the people of the department, describing what they were like, how they got along with each other, and how their personal predilections and ambitions affected the affairs of the department overall.

The book follows the department’s transition from its early Thomism to the philosophical pluralism of the 1970s, then traces its drift from pluralism to what Sayre terms "professionalism,” resulting in what some perceive as a severance from its Catholic roots by the turn of the century. Each chapter includes an extensive biography of an especially prominent department member, along with biographical sketches of other philosophers arriving during the period it covers. Central to the story overall are the charismatic Irishmen Ernan McMullin and Ralph McInerny, whose interaction dominated affairs in the department in the 1960s and 1970s, and who continued to play major roles in the following decades. Philosophers throughout the English-speaking world will find Adventures in Philosophy at Notre Dame essential reading. The book will also appeal to readers interested in the history of the University of Notre Dame and of American higher education generally.

Kenneth M. Sayre is professor of philosophy and director of the Philosophic Institute at the University of Notre Dame.
PrevNext