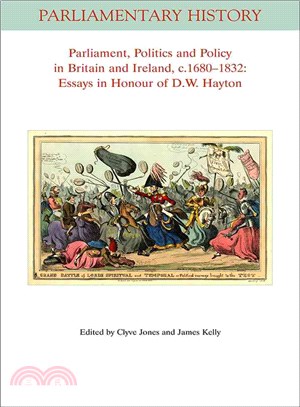 Parliament, Politics and Policy in Britain and Ireland, c. 1680-1832 employs a variety of methodologies to expand our understanding of British and Irish parliamentary history from the exclusion crisis to the Great Reform Act.

Clyve Jones is Honorary Fellow of the Institute of Historical Research and has been Editor of Parliamentary History since 1986. Previously he was Reader in Modern History at the University of London and Collection Development Librarian in the Institute of Historical Research. He has published extensively on the history of the House of Lords and of the peerage in the early eighteenth century. His most recent publications include A Short History of Parliament: England, Britain, the United Kingdom, Scotland and Ireland (2009) and British Politics in the Age of Holmes: Geoffrey Holmes's "British Politics in the Age of Anne" 40 Years On (Wiley, 2009).

James Kelly is Cregan Professor of History at St. Patrick’s College, Dublin City University, Ireland. He is a member of the Royal Irish Academy and of the Irish Manuscripts Commission and currently serves as Editor of Analecta Hibernica and Joint Editor of Proceedings of the Royal Irish Academy. He is past-President of the Irish Historical Society and The Eighteenth-Century Ireland Society. He is the author or editor of several books on Irish history, including most recently, Clubs and Societies in Eighteenth-Century Ireland (2010) and Sir Richard Musgrave, 1746-1818: Ultra-Protestant Ideologue (2009).