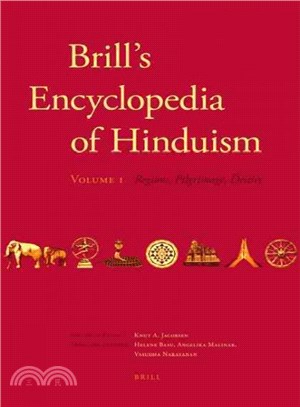 Hinduism is a religion consisting of "a conglomeration of rituals, religious narratives, art, music, institutions, traditions, theologies, artifacts, and activities", according to the introduction of this very fine resource. This richness is welcomed and forms the premise of the encyclopedia, in which the authors were encouraged to write about the religious beliefs and practices found in well-defined geographical areas in South and Southeast Asia as well as in Hindu communities worldwide. The first of five volumes, this work is divided into two broad sections: regions and regional traditions and gods, goddesses, and divine powers. The chapters on geographical areas are self-contained and thorough, with an introduction outlining the geographical boundaries and religious history of the area followed by individual sections on its earliest religious history, the religions and religious practices of the region, their texts, and the significance of Muslim rule, colonial rule, and contemporary religion, as these apply. A section is included on historical Southeast Asia, with chapters on Burma, Cambodia, Indonesia, and Thailand. In addition to the individual entries on gods and goddesses, a section titled "Sacred Space and Time" offers chapters on salvific space and pilgrimage; cosmic cycles, cosmology, and cosmography; festivals; and processions. The chapters were written by an international team of scholars, each of whom has published extensively in the field. This expertise, combined with the generous space allowed for each entry make the volume a compelling read. A map and bibliography accompany each entry. The volume is not indexed; presumably an index will accompany the final volume. Jacobsen teaches history of religion at the U. of Bergen, Norway. Annotation c2009 Book News, Inc., Portland, OR (booknews.com)
PrevNext