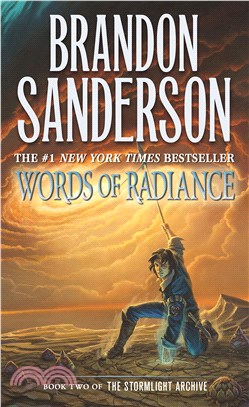 Brandon Sanderson's epic Stormlight Archive continues with his #1 New York Times bestsellingWords of Radiance. Six years ago, the Assassin in White killed the Alethi king, and now he's murdering rulers all over Roshar; among his prime targets is Highprince Dalinar. Kaladin is in command of the royal bodyguards, a controversial post for his low status, and must protect the king and Dalinar, while secretly mastering remarkable new powers linked to his honorspren, Syl. Shallan bears the burden of preventing the return of the Voidbringers and the civilization-ending Desolation that follows. The Shattered Plains hold the answer, where the Parshendi are convinced by their war leader to risk everything on a desperate gamble with the very supernatural forces they once fled.

BRANDON SANDERSON grew up in Lincoln, Nebraska. He lives in Utah with his wife and children and teaches creative writing at Brigham Young University. In addition to completing Robert Jordan’s The Wheel of TimeR, he is the author of such bestsellers as the Mistborn trilogy, Warbreaker, The Alloy of Law, The Way of Kings,Rithmatist, and Steelheart. He won the 2013 Hugo Award for “The Emperor’s Soul,” a novella set in the world of his acclaimed first novel,Elantris.