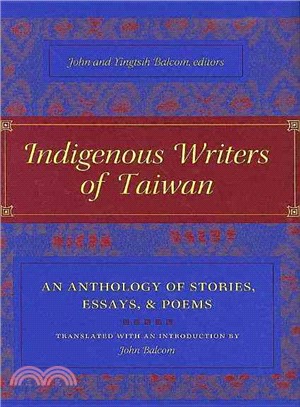 Few people beyond the shores of Taiwan are aware that it is home to a population of indigenous peoples who for more than fifteen thousand years have lived on the island. Over the years, through the Chinese imperial period, the Japanese occupation, and for most of the twentieth century, the indigenous peoples of Taiwan were marginalized and deprived of rights. However, with the lifting of martial law in 1987, new government policies regarding ethnic groups, and growing interest in Taiwan's aboriginal peoples, indigenous writing began to blossom. With its intense and lyrical explorations of a fading culture, indigenous writing has become an important topic of discussion in Taiwanese literary circles.

This collection of indigenous literature is the first such anthology in English. In selecting the stories, essays, and poems for the anthology, the editors provide a representative sampling from each of Taiwan's nine indigenous tribes. The writers explore such themes as the decline of traditional ways of life in Taiwan's aboriginal communities, residual belief in ancestral spirits, assimilation into a society dominated by Han Chinese, and the psychological and economic encroachment of the outside world. Their writings offer previously unheard perspectives on the plight of aboriginal cultures and the experiences of Taiwanese minorities.

John Balcom has included an introduction to provide the reader with background information on Taiwan's indigenous peoples. The introduction addresses the origins of Taiwan's Austronesian peoples and general information on their culture, languages, and history. A discussion of the growth and development of indigenous literature, its sociolinguistic and cultural significance, and the difficulties faced by such writers is also included.

John Balcom is an associate professor and head of the Chinese program in the Graduate School of Translation and Interpretation at the Monterey Institute of International Studies. He is the translator of twelve books, including Li Qiao's Wintry Night and Chang Hsi-kuo's City Trilogy. Yingtsih Balcom is an assistant professor at the Defense Language Institute, Monterey. Her translations of Western and Chinese literature have appeared in many journals, including Renditions, the Chinese Pen, and Chung Wai Literary Monthly.