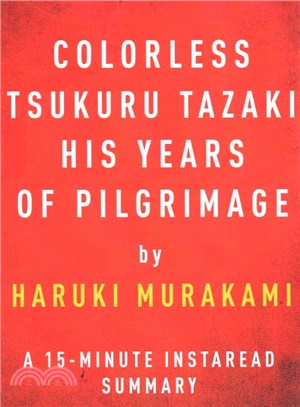 PLEASE NOTE: This is a summary of the book and NOT the original book.
Colorless Tsukuru Tazaki and His Years of Pilgrimage by Haruki Murakami - A 15-minute Instaread Summary

Inside this Instaread Summary:

Preview of this summary:

Tsukuru Tazaki always saw his four best friends from high school as colorful, lively people who made him more than the colorless person he felt he was. Therefore, Tsukuru became depressed following his sophomore year in college when his friends told him that they did not want to be friends anymore without explaining why. He spent five months contemplating suicide.

Sixteen years later, Tsukuru is working in the railroad industry in Tokyo. He is on his fourth date with Sara Kimoto, telling her about his high school friends. When she asks what happened to them, he shares that he went home during school breaks to be with his old friends, but the summer of his sophomore year, that opportunity disappeared.

While he was in his hometown, Nagoya, on a school break from college in Tokyo, Tsukuru’s intimate group of high school friends delivered the message that they did not want to see him again. When asked for an explanation, Ao, one of the four, told him if he thought about it, he should be able to figure it out.

Sara is shocked that he never tried to see any of them again or pursue a reason for their behavior. Tsukuru explains that he was in shock from the complete rejection. Sara pushes him to pursue the truth for his own good, but he says it is best to forget about it. She tells him that he cannot erase history and trying to ignore it is dangerous. Tsukuru tells her he does not want to talk about it, and she ends their date abruptly...