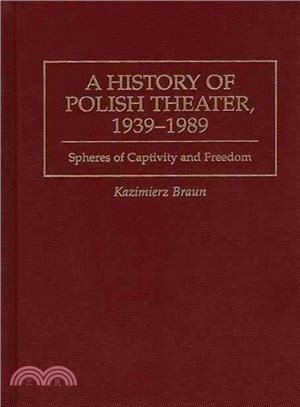 This work explores Polish theater within the context of the political predicament of the country, which was conquered and divided by Nazi Germany and the Soviet Union (1939-1945) and then ruled by the Soviets' imposed Communist regime (1945-1989). Braun examines theatrical events, describes productions, and portrays artists from aesthetic, cultural, and political viewpoints with a scholarly and impartial perspective. This comprehensive introduction, the first of its kind in English, includes brief overviews of the history of Poland and Polish theater, clear discussions of major theatrical developments and the facets of theatrical life in Poland, and 26 detailed profiles of the leading theater artists of the period. The book is supplemented with a bibliography of sources in English and Polish, and indexes of names and plays (with titles in both English and Polish).

KAZIMIERZ BRAUN is Professor of Theater at the State University of New York at Buffalo./e He was formerly artistic director and general manager of the Contemporary (Wspolczesny) Theater in Wroclaw, Poland, as well as professor of theater at both Wroclaw University and Wroclaw School of Drama. In addition to directing over 130 theater and television productions, he has published 11 books on the history of theater, as well as plays, memoirs, short stories, a novel, and numerous scholarly articles.