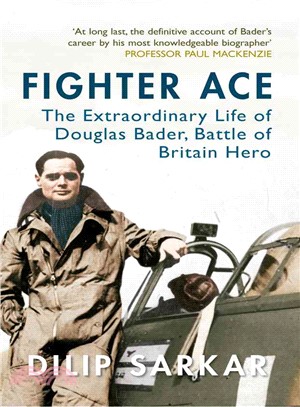 "That he overcame his disability and flew into battle-leading squadrons of Spitfires and Hurricanes in the epic air battle of summer 1940 - is truly remarkable. Bader's first aerial victory - a Messerschmitt 109 - was recorded over Dunkirk on 1 July 1940. During the subsequent Battle of Britian this remarkable airman claimed the destruction of seven more enemy aircraft: Me 110s, Do 17s, Ju 88s and another Me 109 falling to his guns. The legless airman was, of course, rich material for the propagandists, who lost no time in manipulating his exploits to increase Britian's morale. Newspaper reports and radio broadcasts of his aerial victories abounded." --- from back cover.
Dilip Sarkar has been fascinated by the Battle of Britain since childhood, he remains both moved and inspired by the story of Churchill's fabled Few, those young airmen who stood between freedom and a Britain dominated by Nazi Germany. Since the 1970s he has met and interviewed more Battle of Britain pilots than any other historian. He has researched the subject thoroughly and has published over thirty books, titles which include the only biographical works formally endorsed by the families of both Group Captain Sir Douglas Bader and Air Vice-Marshal Johnnie Johnson. In 2003, Dilip was made an MBE for services to aviation history, and elected to the Fellowship of the Royal Historical Society in 2006. He lives in Worcester. For more information please see www.dilipsarkarmbe.co.uk.
PrevNext