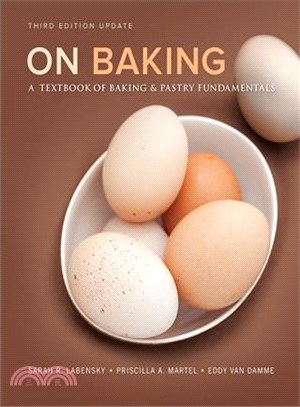 This comprehensive text is designed for courses in baking and the pastry arts, yet still accessible to the aspiring home baker

Help readers understand the how and why of successful baking
On Baking, Third Edition, Update enhances the fundamentals approach that has prepared thousands of students for successful careers in the baking and pastry arts. It teaches both thehow and why, starting with general procedures, highlighting core principles and skills, and then presenting applications and sample recipes. Professionalism, breads, desserts and pastries, advanced pastry work–including chocolate work–are each covered in detail. To help students truly master baking, the book also incorporates scientific, cultural, and historical aspects of the culinary arts.

More than 230 new full-color photographs, 40 new recipes, and information on key trends like healthy baking, wedding cakes, and plating techniques help prepare readers to use the latest methods and recipes.

Also available with MyCulinaryLab
This title is also available with MyCulinaryLab—an online homework, tutorial, and assessment program designed to work with this text to engage students and improve results. With its vast collection of recipes tested in the kitchens of top culinary schools and an extensive ingredient database, Pearson Kitchen Manager allows Chefs to maximize the value of their recipe content. New Culinary Math Problem-Sets for baking are designed to help students with varying levels of math knowledge master the basic math skills they need to be successful in the kitchen, and apply them within the context of baking.

MyCulinaryLab should only be purchased when required by an instructor.

Chef Priscilla Martel
Priscilla Martel is a professional chef, educator and food writer with a special interest in artisan baking, the pastry arts and Mediterranean cuisines. She honed her cooking skills at Restaurant du Village, a country French restaurant opened in Chester, CT in 1979. Today, she operates All About Food, which holds several baking patents and collaborates with food manufacturers and restaurants to create innovative products, menus and marketing programs.

She is a visiting instructor at Boston University’s certificate program in the culinary arts. She speaks to consumer and professional organizations about baking, almonds and healthy cooking. She is a contributing writer for Flavor and the Menu Magazine and the culinary director of American Almond Products Company, a leading baking-industry ingredient manufacturer. She is an active member of the International Association of Culinary Professionals, Bread Baker's Guild of America and the International Association of Foodservice Editors.

She is co-author of On Cooking: A Textbook of Culinary Fundamentals (Pearson, 5/e update, 2014) andMath for Bakers DVD.

Chef Eddy van Damme
Belgian-born pastry chef and confectioner, Eddy Van Damme is Professor in the Baking and Pastry Arts Program at Houston Community College. He studied at pastry school in Bruges and at PIVA in Antwerp, Belgium as well as in Paris at LeNotre and Cacao Barry before coming to the United States over 20 years ago. Winner of 5 American Culinary Federation Gold Medals, Chef Van Damme consults to many companies including Imperial Sugar. He is host of popular and award-winning TV showBake It!