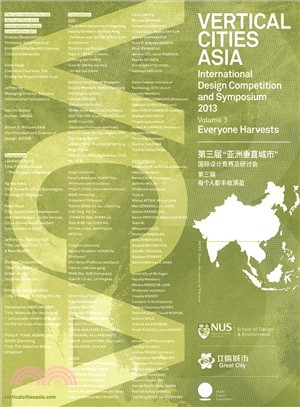 The scale and speed at which Asian cities are growing and densifying is without historical precedent. Continued recycling of existing urban planning and architectural models will lead to devastating effects on land, infrastructure, and the environment.

The Vertical Cities Asia International Design Competition and Symposium were created to encourage design explorations and research into the prospects of new models for the increasingly vertical, dense, and intense urban environments in Asia. Editions one (Chengdu, 2011) and two (Seoul, 2012) of the five-year programme were themed ‘Everyone Needs Fresh Air’ and ‘Everyone Ages’.

The third edition (Hanoi, 2013) was themed ‘Everyone Harvests’, and sought potential solutions for an entirely new approach to urban agriculture. The competition called for new modes of urban agriculture forged with consideration of energy and water resources. This book presents the spectrum of innovative design and theoretical approaches proposed in the competition entry schemes and symposium.
PrevNext