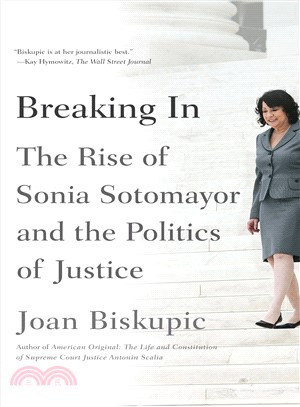 So quipped Antonin Scalia about Sonia Sotomayor at the Supreme Court's annual end-of-term party in 2010. It's usually the sort of event one would expect from such a grand institution, with gentle parodies of the justices performed by their law clerks, but this year Sotomayor decided to shake it up--flooding the room with salsa music and coaxing her fellow justices to dance.
It was little surprise in 2009 that President Barack Obama nominated a Hispanic judge to replace the retiring justice David Souter. The fact that there had never been a nominee to the nation's highest court from the nation's fastest growing minority had long been apparent. So the time was ripe--but how did it come to be Sonia Sotomayor?
In Breaking In: The Rise of Sonia Sotomayor and the Politics of Justice, the veteran journalist Joan Biskupic answers that question. This is the story of how two forces providentially merged--the large ambitions of a talented Puerto Rican girl raised in the projects in the Bronx and the increasing political presence of Hispanics, from California to Texas, from Florida to the Northeast--resulting in a historical appointment. And this is not just a tale about breaking barriers as a Puerto Rican. It's about breaking barriers as a justice.
Biskupic, the author of highly praised judicial biographies of Justice Antonin Scalia and Justice Sandra Day O'Connor, now pulls back the curtain on the Supreme Court nomination process, revealing the networks Sotomayor built and the skills she cultivated to go where no Hispanic has gone before. We see other potential candidates edged out along the way. And we see how, in challenging tradition and expanding our idea of a justice (as well as expanding her public persona), Sotomayor has created tension within and without the court's marble halls.
As a Supreme Court justice, Sotomayor has shared her personal story to an unprecedented degree. And that story--of a Latina who emerged from tough times in the projects not only to prevail but also to rise to the top--has even become fabric for some of her most passionate comments on matters before the Court. But there is yet more to know about the rise of Sonia Sotomayor.Breaking In offers the larger, untold story of the woman who has been called "the people's justice."

Joan Biskupic has covered the Supreme Court for more than twenty years and is the author of several books, includingAmerican Original: The Life and Constitution of Supreme Court Justice Antonin Scalia (Sarah Crichton Books/FSG, 2009) andSandra Day O'Connor. She is an editor in charge for legal affairs at Reuters News. Before joining Reuters in 2012, she was the Supreme Court correspondent forUSA Today and for The Washington Post. A graduate of Georgetown University Law School, she is a regular panelist on PBS'sWashington Week and on NPR's Diane Rehm Show. She lives in Washington, D.C., with her husband and daughter.
PrevNext