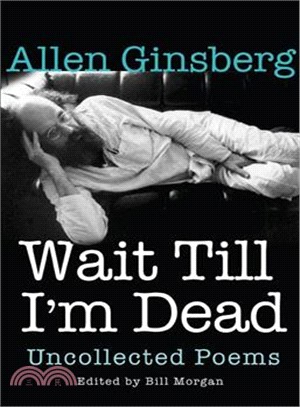 The first Ginsberg book since the updating of the Collected Poems in 2006,Wait 'Til I'm Dead is a landmark publication, sure to garner significant attention. Ginsberg wrote incessantly for more than fifty years, often composing poetry on demand, and many of the poems collected for the first time in this volume were scribbled in letters or sent off to obscure publications and unjustly forgotten. Wait 'Til I'm Dead, which spans the whole of Ginsberg's long writing career, from the 1940s to the 1990s, is a testament to Ginsberg's astonishing writing and singular aesthetics. At times he grew weary of the work and complained that he was overburdened, but the complaint often took the shape of a poem itself.

Following the chronology of his life, Wait 'Til I'm Dead reproduces the poems together with Ginsberg’s extensive notes, which situate them in the context of their contemporary worlds. Containing 103 previously unpublished poems and accompanied by original photographs, Wait Till I’m Dead is the final major contribution to Ginsberg’s sprawling oeuvre, a must have for Ginsberg neophytes and long-time fans alike.
Allen Ginsberg (19261997) was a poet, activist, and one of the Beat Generation's most renowned writers. He was a member of the American Academy of Arts and Letters and co-founder of the Jack Kerouac School of Disembodied Poetics at Naropa Institute. He won the National Book Award for Poetry and his poem Howl is one of the most widely read and translated poems of the century.

Bill Morgan is a painter and archival consultant who lives in New York City and Bennington, Vermont. He is the author ofThe Beat Generation in New York and The Beat Generation in San Francisco,I Celebrate Myself: The Somewhat Private Life of Allen Ginsberg, and editedDeliberate Prose: Selected Essays of Allen Ginsberg, 19521995, as well as Ginsberg’sBook of Martyrdom and Artifice: First Journals and Poems, 19371952, and Howl on Trial: The Battle for Free Expression.
PrevNext