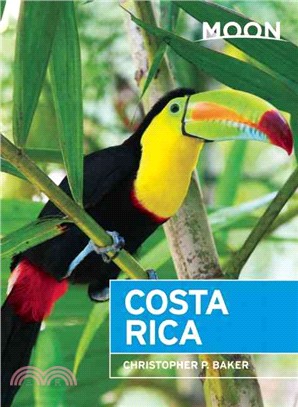 Award-winning travel writer Christopher P. Baker shows travelers the way to the best of Costa Ricawhether it's surfing the beaches of Golfo Dulce, hiking in Corcovado National Park, or dining in the upscale Escazubarrio in San Jose. Along with his in-depth coverage, Baker includes unique trip ideas for a variety of interests, such as "Sweet Retreats," "Best Beaches," and "Adrenaline Rush." Complete with details that range from where to surf to which spots are the best for seeing wildlife, Moon Costa Rica gives travelers the tools they need to create a more personal and memorable experience.

Coverage includes:
San Jose
The Central Highlands
The Caribbean Coast
The Northern Zone
Guanacaste and the Northwest
The Nicoya Peninsula
Central Pacific
Golfo Dulce and the Osa Peninsula
South-Central Costa Rica
Christopher P. Baker was born and raised in Yorkshire, England. He received a BA in geography from University College, London, and masters degrees in Latin American studies from Liverpool University and in education from the Institute of Education, London University.

He began his writing career in 1978 as a contributing editor on Latin America forLand & Liberty, a London-based political journal. In 1980, he received a Scripps-Howard Foundation Scholarship in Journalism to attend the University of California, Berkeley.

Since 1983, Christopher, the 2008 Lowell Thomas Travel Journalist of the Year, has made his living as a professional travel writer, photographer, lecturer, and tour guide. He specializes in Cuba and Costa Rica, about which he has written six books each, includingMoon Cuba; his most recent coffee-table book, Enchanting Costa Rica. He is also the author of theCosta Rica Pura Vida! travel app. He has contributed to more than 150 publications worldwide, including CNN Travel,National Geographic Traveler, Robb Report, and The Los Angeles Times. He is a Getty Images andNational Geographic contributing photographer.

Christopher has been profiled in USA Today, appears frequently on radio and television talk shows and as a guest-lecturer aboard cruise ships, and has spoken at the National Press Club, World Affairs Council, and onNational Geographic Live. He is a National Geographic Resident Expert and leads tours of Costa Rica, Panama, Colombia, and Cuba forNational Geographic Expeditions, as well as group motorcycle tours of these destinations for MotoDiscovery and Motolombia.