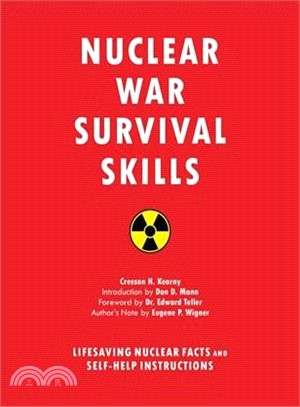 A field-tested guide to surviving a nuclear attack, written by a revered civil defense expert.

This edition of Cresson H. Kearny’s iconic Nuclear War Survival Skills (originally published in 1979), updated by Kearny himself in 1987 and again in 2001, offers expert advice for ensuring your family’s safety should the worst come to pass. Chock-full of practical instructions and preventative measures, Nuclear War Survival Skills is based on years of meticulous scientific research conducted by Oak Ridge National Laboratory.

Featuring a new introduction by ex-Navy SEAL Don Mann, this book also includes: instructions for six different fallout shelters, myths and facts about the dangers of nuclear weapons, tips for maintaining an adequate food and water supply, a foreword by “the father of the hydrogen bomb,” physicist Dr. Edward Teller, and an “About the Author” note by Eugene P. Wigner, physicist and Nobel Laureate.

Written at a time when global tensions were at their peak, Nuclear War Survival Skills remains relevant in the dangerous age in which we now live.
Cresson H. Kearny was a graduate of the Texas Military Institute and of Princeton University. He worked for Standard Oil in Venezuela and served in the US Army as a captain in the Panama Mobile Force. Many of his jungle-tested inventions were used by US infantrymen in WWII. In 1964, Kearny joined the Oak Ridge National Laboratory civil defense project, which is where the research supporting his bookNuclear War Survival Skills was conducted. He died in 2003.

Don Mann is an ex-Navy SEAL, an athlete, and a prolific author of Navy SEALrelated fiction and nonfiction. He has made numerous television appearances across all major networks and has written pieces forTime, Newsweek, Runner’s World, Men’s Fitness, Huffington Post, CNN.com,Wall Street Journal, Washington Post, and many more. He lives in Miami, Florida.


Dr. Edward Teller (19082003) was a theoretical physicist known colloquially as the father of the hydrogen bomb.” He was a key member of the Manhattan Project during WWII.

Eugene P. Wigner (19021995) was a noted theoretical physicist and mathematician. He received the Nobel Prize in Physics in 1963.
PrevNext