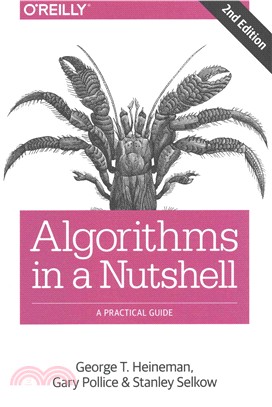 Creating robust software requires the use of efficient algorithms, but programmers seldom think about them until a problem occurs. This updated edition ofAlgorithms in a Nutshell describes a large number of existing algorithms for solving a variety of problems, and helps you select and implement the right algorithm for your needs—with just enough math to let you understand and analyze algorithm performance.

With its focus on application, rather than theory, this book provides efficient code solutions in several programming languages that you can easily adapt to a specific project. Each major algorithm is presented in the style of a design pattern that includes information to help you understand why and when the algorithm is appropriate.

With this book, you will:

Gary Pollice is a self-labeled curmudgeon (that's a crusty, ill- tempered, usually old man) who spent over 35 years in industry trying to figure out what he wanted to be when he grew up. Even though he hasn't grown up yet, he did make the move in 2003 to the hallowed halls of academia where he has been corrupting the minds of the next generation of software developers with radical ideas like, "develop software for your customer, learn how to work as part of a team, design and code quality and elegance and correctness counts, and it's okay to be a nerd as long as you are a great one." Gary is also a co-author of Head First Object-Oriented Analysis and Design.Gary is a Professor of Practice (meaning he had a real job before becoming a professor) at Worcester Polytechnic Institute. He went to WPI because he was so impressed with the WPI graduates that he's worked with over the years. He lives in central Massachusetts with his wife, Vikki, and their two dogs, Aloysius and Ignatius. When not working on geeky things he ... well he's always working on geeky things. You can see what he's up to by visiting his WPI home page athttp://web.cs.wpi.edu/~gpollice/. Feel free to drop him a note and complain or cheer about the book.

Stanley Selkow received a BS in Electrical Engineering from Carnegie Institute of Technology in 1965, and then a Ph.D. in the same area from the University of Pennsylvania in 1970. From 1968 to 1970 he was in the Public Health Service at the National Institutes of Health at Bethesda Maryland. Since 1970 he has been on the faculty at universities in Knoxville TN and Worcester MA, as well as Montreal, Chonqing, Lausanne and Paris. His major research has been in graph theory and algorithm design.