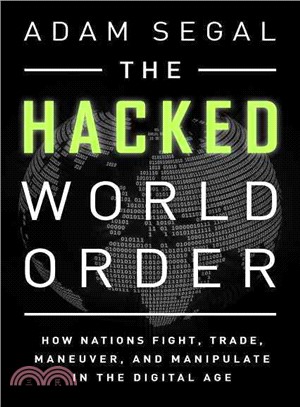 The internet today connects roughly 2.7 billion people around the world, and booming interest in the "internet of things" could result in 75 billion devices connected to the web by 2020. The myth of cyberspace as a digital utopia has long been put to rest. Governments are increasingly developing smarter ways of asserting their national authority in cyberspace in an effort to control the flow, organization and ownership of information.

In A Hacked World Order, Adam Segal shows how governments use the web to wage war and spy on, coerce, and damage each other. Israel is intent on derailing the Iranian nuclear weapons program. India wants to prevent Pakistani terrorists from using their Blackberries to coordinate attacks. Brazil has plans to lay new fiber cables and develop satellite links so its Internet traffic no longer has to pass through Miami. China does not want to be dependent on the West for its technology needs. These new digital conflicts pose no physical threatno one has ever died from a cyberattackbut they serve to both threaten and defend the integrity of complex systems like power grids, financial institutions, and security networks.

Segal describes how cyberattacks can be launched by any country, individual, or private group with minimal resources in mere seconds, and why they have the potential to produce unintended and unimaginable problems for anyone with an internet connection and an email account. State-backed hacking initiatives can shut down, sabotage trade strategies, steal intellectual property, sow economic chaos, and paralyze whole countries. Diplomats, who used to work behind closed doors of foreign ministries, must now respond with greater speed, as almost instantaneously they can reach, educate, or offend millions with just 140 characters.

Beginning with the Stuxnet virus launched by the US at an Iranian nuclear facility in 2010 and continuing through to the most recent Sony hacking scandal,A Hacked World Order exposes how the internet has ushered in a new era of geopolitical maneuvering and reveals the tremendous and terrifying implication on our economic livelihood, security, and personal identity.
Adam Segal is the Maurice R. Greenberg senior fellow for China studies and director of the Program on Digital and Cyberspace Policy at the Council of Foreign Relations (CFR). Before coming to the CFR, Dr. Segal was an arms control analyst for the China Project at the Union of Concerned Scientists. There, he wrote about missile defense, nuclear weapons, and Asian security issues. He has been a visiting scholar at the Massachusetts Institute of Technology's Center for International Studies, the Shanghai Academy of Social Sciences, and the Tsinghua University in Beijing. He has taught at Vassar College and Columbia University. An expert on security issues, technology development, and Chinese domestic and foreign policy, Dr. Segal was the project director for the CFR-sponsored Independent Task Force report Defending an open, Global, Secure and Resilient Internet and the author ofDigital Dragon: High-Technology Enterprises in China (Cornell University Press; 2003) andAdvantage: How American Innovation Can Overcome the Asian Challenge (W. W. Norton; 2011). His work has appeared in theFinancial Times, The Economist, Foreign Policy, The Wall Street Journal andForeign Affairs among others. He currently writes for the blog, "Net Politics." Dr. Segal has a BA and a PhD in government from Cornell University, and an MA in international relations from the Fletcher School of Law and Diplomacy, Tufts University.
PrevNext