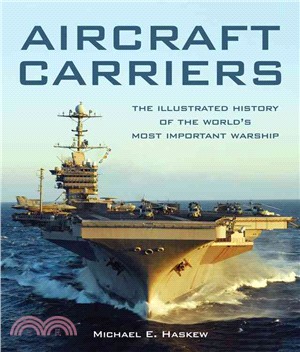 Follow the development of the most important innovation in naval warfare through this superbly illustrated volume.

The ultimate version of the warship is the aircraft carrier. The typical twenty-first-century carrier is an immense, nuclear-powered war machine capable of launching dozens of aircraft to perform a wide variety of missions including attack, escort, antisubmarine patrol, and deterrence.

Only four nations have produced their own carriers and operated them effectively: the United States, Britain, Japan, and France. Other navies have acquired conventional "flattops" and deployed them, but not as widely or as efficiently.

The story of the fighting flattop begins with the Royal Navy in WWI, culminating in both the Atlantic and Pacific in WWII. For the United States, carriers were vital to securing the sea lanes to Great Britain and in taking the war to the shores of Japan. During the forty-plus years of the Cold War, US carriers retained their primacy as weapons and as targets, and today they remain valuable while facing an uncertain future due to a changing world and escalating costs.

Award-winning author Barrett Tillman has been described as "the man who owns naval aviation history." He has flown naval aircraft, been at sea in carriers, and edited the world's leading naval aviation magazine. InAircraft Carriers: The Illustrated History of the World's Most Important Warship, he shares the complete aircraft carrier story with you.

Michael E. Haskew has been writing and researching military history subjects for over twenty years. He is the editor ofWWII History Magazine and the author of more than ten books about a wide range of military history, includingWest Point 1915: Eisenhower, Bradley, and the Class the Stars Fell On and Tank: 100 Years of the World's Most Important Armored Military Vehicle (both Zenith Press). Haskew resides in Chattanooga, Tennessee.