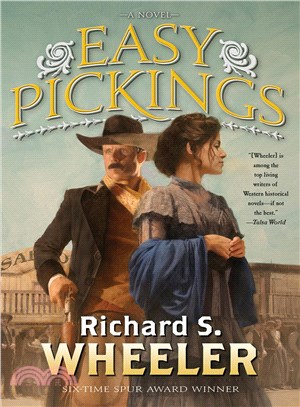 A widow must defend herself and her property from greedy townsfolk in this new tale from renowned master of the Western novel, Richard S. Wheeler.

Life hasn't always been easy for March and Kermit McPhee, but things are looking up. March gives birth to a healthy son, and their small gold mine is looking better and better as Kermit blasts his way along a good seam of ore. Then Kermit is crushed by a cave-in.

As soon as her husband dies, crooks are at March's door, eager to get their hands on the mine. The peaceful town of Marysville, Montana, is peaceful no more. March's home is burned and her baby killed. Terrified and threatened, she is targeted by the wealthy and powerful.

March fights back every way she can. She discovers she has allies: a saloon man named Tipperary Leary, an assayer named Rolf Wittgenstein, and a slippery lawyer named Hermes Apollo. Still, March must ask herself whether it is worth it; whether a gold mine, or wealth of any sort, should be defended at such a price.

RICHARD S. WHEELER is the author of more than fifty novels of the American West, including North Star, The Owl Hunt, and The first Dance. He holds six Spur Awards and the Owen Wister Award for lifetime contribution to the literature of the West. He makes his home in Livingston, Montana, near Yellowstone National Park.
PrevNext