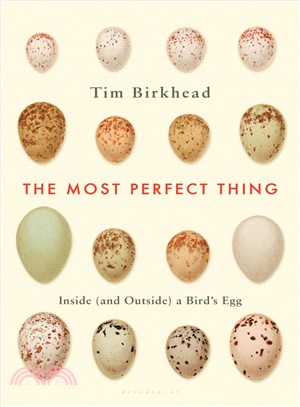 Renowned ornithologist Tim Birkhead opens this gripping story as a female guillemot chick hatches, already carrying her full quota of tiny eggs within her undeveloped ovary. As she grows into adulthood, only a few of her eggs mature, are released into the oviduct, and are fertilized by sperm stored from copulation that took place days or weeks earlier. Within a matter of hours, the fragile yolk is surrounded by albumen and the whole is gradually encased within a turquoise jewel of a shell. Soon afterward the fully formed egg is expelled onto a bare rocky ledge, where it will be incubated for four weeks before another chick emerges and the life cycle begins again.

A Bird's Egg is about how eggs in general are made, fertilized, developed, and hatched. The eggs of most birds spend just 24 hours in the oviduct; however, that journey takes 48 hours in cuckoos, which surreptitiously lay their eggs in the nests of other birds. From the earliest times, the study of birds' ovaries and ova (eggs) played a vital role in the quest to unravel the mysteries of fertilization and embryo development in humans. Birkhead uses birds' eggs as wondrous portals into natural history, enlivened by the stories of naturalists and scientists, including Birkhead and his students, whose discoveries have advanced current scientific knowledge of reproduction.

Tim Birkhead teaches animal behavior and the history of science at the University of Sheffield. He is a fellow of the Royal Society of London and the author of several books, including Bird Sense; The Wisdom of Birds; The Cambridge Encyclopedia of Ornithology, which won the McColvin Medal; and The Red Canary, which won the Consul Cremer Prize. He lives in Sheffield, England.
PrevNext