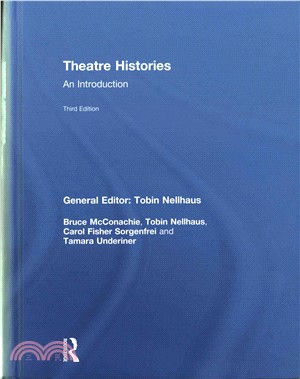 This new edition of the innovative and widely acclaimed Theatre Histories: An Introduction offers a critical overview of global theatre and drama, spanning a broad wealth of world cultures and periods. Illustrating historiographical theory with case studies demonstrating the methods and interpretive approaches used by today's theatre historians, the authors offer a detailed and thorough examination of global theatre.

Fully revised and renewed, features of this third edition include:

Bruce McConachie is Chair of Theatre Arts at the University of Pittsburgh, where he also directs and performs. He has published widely in American theatre history, theatre historiography, and performance and cognitive studies and is a former President of the American Society for Theatre Research. Some of his major books includePerformance and Cognition (with F. Elizabeth Hart, Routledge 2006) and Engaging Audiences: A Cognitive Approach to Spectating in the Theatre (Palgrave Macmillan 2008).

Tobin Nellhaus is the past Librarian for Performing Arts, Media and Philosophy at Yale University. He writes mainly on the relationship between theatre and communication practices, and on critical realism in theatre historiography. He is the author of Theater, Communication, Critical Realism (Palgrave Macmillan, 2010).

Carol Fisher Sorgenfrei is Distinguished Professor of Theater and Performance Studies at U.C.L.A. and former Research Fellow in the Institute for Theatre Studies at Berlin's Free University. She is a scholar, translator, playwright, and director focusing on Japanese and cross-cultural theatre. She is the author of Unspeakable Acts: the Avant-Garde Theatre of Terayama Shuji and Postwar Japan (University of Hawaii Press 2005), as well as many journal articles, essays in books, play translations, and encyclopedia entries. Her fifteen original plays include the award-winning Medea: A No Cycle Based on the Greek Myth and the kabuki-flamenco Blood Wine, Blood Wedding. With Israeli director Zvika Serper, she created the internationally acclaimed Japanese-Israeli fusion playThe Dybbuk: Between Two Worlds.

Tamara Underiner is Associate Dean for Research for the Herberger Institute for Design and the Arts at Arizona State University, and director of the Ph.D. program in Theatre and Performance of the Americas. She is the author ofContemporary Theatre in Mayan Mexico: Death-Defying Acts (University of Texas Press, 2004).